I’m never going to live it down. Yesterday I went downstairs to find wrapping paper when hubby quickly popped me near the rest room and talked in a whisper.

Guess who just front up? Your doctor’s wife . She’s at the counter.

The reason he knows as she told our pharmacist she’s such and such wife.

After that that was it. He teased me the whole afternoon. Now you know what his wife looks like. No wonder he liked you. His wife is ugly and he went on and on and on.

The thing is I’m not interested in this doctor. For one he’s much older. For two no chemistry. For three not my type. Yet he went on and on and on.

That’s what happens when I tell him things. So guess I’d better keep my mouth shut from now on. Not that I can keep a secret . My kids refuses to tell me stuff. Last night my son said you can’t keep a secret very well mum.

Westfield to go to Daiso and Myer for make up.

My interview was cancelled this morning so I’ll be home waiting for my 10am appointment with the gas guy. Our fire place is stuffed and well it’s time it gets a service since we’ve never had it serviced. We’ve been here 6-7 years now.

Lunch yesterday. Weird noodle soup . Don’t think I’ll order it again. A take on fish head soup but with fish fillet. And for that hubby demanded half a jig-a-jig. Which I told him no because it wasn’t a nice lunch 😂 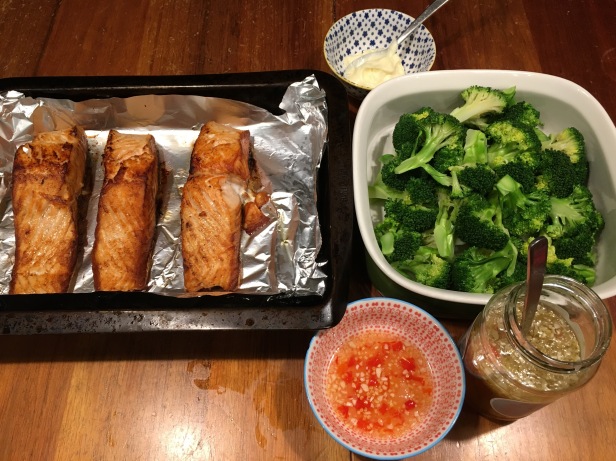 Dinner last night . Salmon pan fried then popped into the oven 180C for 15 minutes to cook further. Blanched broccoli with mayo. Hubby made the dipping sauce. I just prep.

I only ever cook easy stuff when I don’t feel like cooking . That way I don’t stuff it up.

Feeling a bit better today. Jumped hubby this morning since I had a very sexy dream last night.

For that he told me I now owe him 3 jig-a-jig and not 1 as it was originally 2. I can’t win. His reasoning I jumped him not he jumped me so he gets to add on another 😩 He cheats so bad.