I took another V out yesterday afternoon. We did Melbourne CBD in 3 hours. She’s hubby’s sister in law’s sister.

Thankfully she’s fast like me or else we wouldn’t have accomplished what we had.

We did St Patrick’s cathedral walked through Chinatown after passing Parliament House.

Then from Chinatown we went to visit the laneway with the two entwining bodies uphigh.

From there we went inside the Emporium to show her where the shops are. Through to Bourke St Mall through all the beautiful old arcades where we found a puzzle for her daughter and eateries in the laneway and ended up in Flinders St.

We then headed down to Elizabeth St headed into Woolies so she can buy cereal and dried fruits as gifts.

After that I took her to Collins St to see the ANZ building by foot then by tram down to Southern Cross to take photos and go to the DFO (direct factory outlet ) so she can hunt for a back pack for her daughter and peelers for a friend.

From SCS we headed up Collins again to Elizabeth to go through Flinders and cross the bridge to Southbank.

We didn’t have much time as was due at restaurant at 7pm for dinner.

A walk and photos later of the Yarra river we took two trams to get to the restaurant passing the Carlton Gardens on the way.

That was the two things she missed the gardens and Vic market.

Vic market would have closed by time we got there. I didn’t get to her until near 3:30pm.

Have to say we did really well for three hours.

At night we took her to Il Carretto for Italian then walked a few kms to Brunetti. The kids were whinging . Hubby and his cousin was whinging.

We were like what the? We both walked most of the afternoon and we’re not whinging.

It was so we could digest our dinner and make room for cakes and coffee. Plus a chance for him and his cousin to catch up on news from VN.

A shop we passed by. 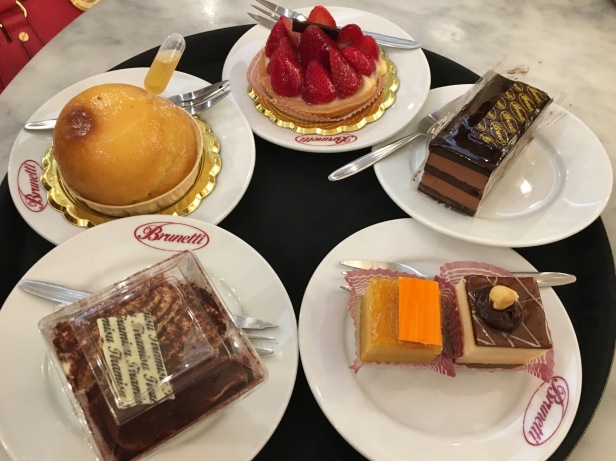 Bumped into one of my colleagues that I used to work with at St Vincent’s 20+ years ago so left them all at the next table and joined her and her family at their table.

So much fun to catch up since I haven’t seen them for a long time. We tend to bump into each other at cafes for some reason 😂 Guess we love our coffees 😂