My teeth soon. I’m tired. The kids came around 6pm.

We ended up with ramen for dinner. Plus extra spinach and Chinese cabbage.

They stayed til 8:30pm and all went home. All were tired from work. My babies are all adults now with responsibilities.

Last night Mr Wanderer rang to see if I wanted to see him. And of course I did.

He was going to stay another night at his parents but decided not to. He said it was tempting. He wouldn’t tell me why.

In person he asked me would you believe I went back early because I missed you? I laughed nope! 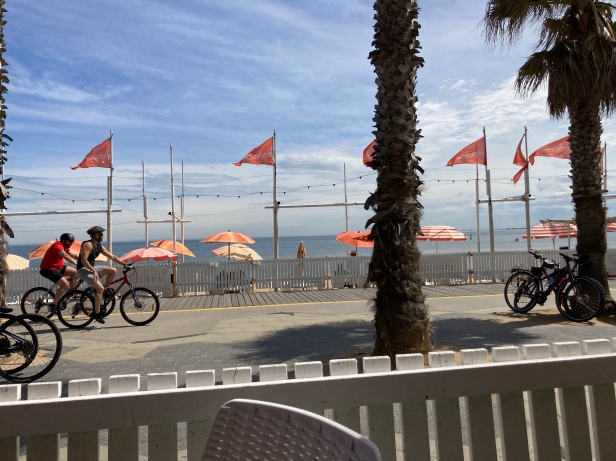 This morning he was extremely busy. We were going to cycle into the city for lunch. At 11:30am he was like give me 45 minutes.

By 12:45pm I was like stuff it! So little Ms V went to the freezer and took two slices of pizza out. Cut up some tomatoes and cucumber and waited til the pizza was ready. That was after she’s downed a slice of cheese, an ice cream and some sweet potato.

I was like nope. I’m not going anywhere until I’ve eaten. He’s left lunch too late and I’m shaking.

With my calculations by the time we get into the city it would be 1:25pm-1:30pm and then still got to go find lunch 😩

He was like I’ve never met anyone like you that eat all the time. And shakes when she doesn’t eat.

Anyhow we managed to cycle to St Kilda and sat down for a drink. He had a banana milk shake and I had an iced coffee.

Thought he might have ordered a chocolate one. Forgot he’s banana mad 😂

I’ve gotten a buyer for my bike rack. Hopefully they come and pick it up tomorrow as then I can shout R to a nice meal. R returned it to me as she has no use for it.

Still waiting for Mr Wanderer to get back to me about the weekend. He hasn’t mentioned anything at all. So not sure if we are going away?

It would be nice to take the caravan with us. I doubt it though if it’s a business trip.